About the Wisbech Standard


The Wisbech Standard was founded in 1888 by the Sharman family who owned the title, along with several others, until the 1980s.


The Standard has always been the one paper that people relied upon to find out what was happening in a most disparate cross-border area which included Norfolk and Lincolnshire, as well as Cambridgeshire.


Wisbech itself is a town with a massive historical heritage and its people's understandable pride in that heritage has always been reflected in the title.


The Standard's underlying philosophy has always been the need for absolute fairness and accuracy in its reflection of the town, its hinterland and its people.


As the town looks forward to an enhanced future, with massive commercial development in the pipeline, its vibrant community is now well served by a newspaper with award-winning print and web editions which have impacted greatly on the wider newspaper world.


The newspaper prides itself on its broad reach into Fenland, where it embraces a growing portfolio of sponsored events that support many local groups and organisations.


It's small but dedicated news team commands enormous respect and is recognised widely for its authoritative coverage of major news issues and campaigns.


Coupled with a highly-motivated and professional advertising and sales force, the Standard provides an industry-beating package for the reader and advertiser.

The hapless driver who came unstuck attempting a U-turn in the Fens today (Thursday) had clearly not heard Maggie Thatcher’s famous speech. 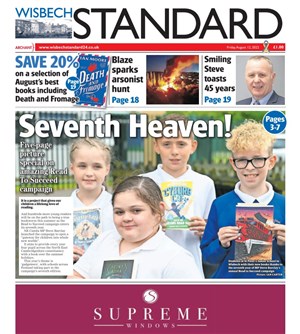 Voice of the Fens

Could equity release help you to ‘rightsize’ your home?